Do you have appendicitis symptoms like pain in the right side of the stomach? Whether you have chronic or acute appendicitis, the best treatment is appendix operation. Consult the experienced appendix doctor in Faridabad near you and undergo appendicitis surgery or appendectomy for removal of an inflamed and infected appendix.

The appendix is a small 3 and 1/2-inch-long pouch joined to the large intestine on the lower right side of your belly (abdomen).Appendicitis typically starts with pain around the navel. Within hours, the pain travels to the lower right-hand side, where the appendix usually lies and becomes constant and severe as the inflammation worsens.

Although anyone can develop appendicitis at any age, most often it occurs in people between the ages of 10 and 30. At Pristyn Care, we have the finest doctors and medical coordinators who will take care of you until you are relieved. 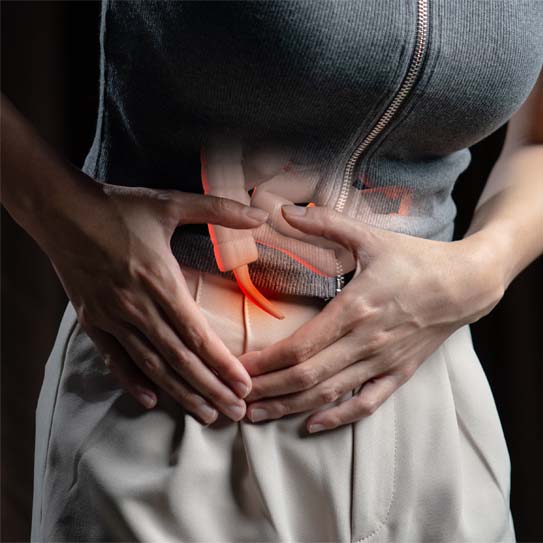 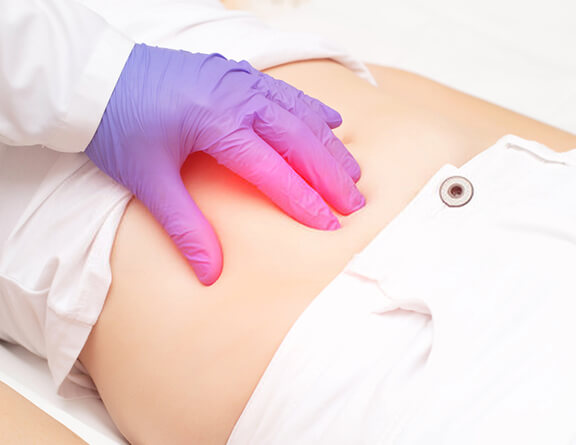 What are the treatment options for appendicitis?

What are the types of appendicitis?

In Our Doctor's Word 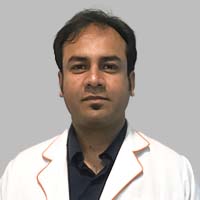 "Most people don't even know about appendix until the appendicitis develops. However, once the pain begins, the condition is usually acute, the pain grows rapidly and turns severe within a day or two. This is why, once appendicitis is recorded, I always suggest immediate treatment. Any delay only severes the condition, risks rupture, infection and disturbed bodily functions. It is one of worst pains. Therefore, I strongly suggest, if you feel any abnormal or intense pain in the extreme right side of your lower pelvic, seek immediate medical help and do not delay treatment. If diagnosed early, it can be treated through laparoscopy and the recovery can be much faster and simple. "

What kind of doctor should I see for an appendix treatment?

If you have signs and symptoms indicative of an appendix, you can initially consult with a primary healthcare provider or a general physician. But you experience an increase in the pain near the belly button or if you start vomiting suddenly, it is best if you consult a laparoscopic surgeon who is an appendix specialist. You can consult some of the best appendix doctors at Pristyn Care.

Is there any Pristyn Care appendix treatment clinic near me in the Faridabad?

There are several Pristyn Care clinics in the city where one can get through consultation and effective surgical treatment for acute as well as chronic appendicitis treatment from experienced appendix specialists. You can contact the clinic’s medical assistance executive to know which clinic location would be most suitable for you.

How is an appendix surgery done in a hospital in the Faridabad?

All the appendicitis specialists working at Pristyn Care-associated hospitals prefer to treat an appendix, in both regular and emergency conditions, through laparoscopic surgery. In this procedure, the surgeon makes tiny incisions and inserts a laparoscope. Using the device, the surgeon removes the defective appendix and seals the incisions.

What are the emergency signs of appendicitis?

Here are some signs that mean that you need emergency treatment for appendicitis:

Most of these symptoms are associated with a ruptured appendix. Therefore, you will need emergency treatment.

Is it possible to treat appendicitis without surgery?

Yes. Chronic appendicitis can be treated with the help of antibiotic medicines, such as ampicillin, tramadol, diclofenac, ceftriaxone, etc. These medicines will treat the infection and reduce inflammation that will provide you temporary relief. However, there will still be chances of recurrence and advancement of chronic appendicitis into acute appendicitis.

Yes. Surgery is the permanent cure for appendicitis as it removes the organ completely, thereby eliminating the pain and other symptoms.

Which doctor to consult for appendicitis?

You can consult a family practitioner, primary care provider (PCP), internist, and pediatrician at first if you have symptoms of appendicitis. If the case is acute and you need surgery, a general surgeon would be the right person to consult. They will provide surgical as well as medical care for appendicitis treatment.

How can I find an appendix specialist in Faridabad near me?

To find the best doctor in Faridabad for appendix treatment, you should follow these tips:

Is appendix operation cost in Faridabad covered by insurance?

Yes. Appendix surgery cost in Faridabad is covered under insurance plans of most insurance providers. It is a life-threatening condition that is necessary to treat. Therefore, you can easily get a claim for appendicitis treatment and get best-in-class services at the top hospitals in Faridabad.

Does Pristyn Care have its own hospital in Faridabad for appendix surgery?

No. Pristyn Care doesn’t have its own hospital in Faridabad for appendix treatment. We are partnered with the best hospitals and clinics that have state-of-the-art facilities and top-grade amenities to take care of all patient needs.

No. Appendix surgery itself doesn’t hurt at all. This is because the patient is given anesthesia during the procedure. Once the anesthesia takes effect, the patient doesn’t feel any kind of pain or discomfort. However, you may experience pain or numbness after the anesthesia wears off, for which, the doctor will prescribe you pain medications.

No. Exercise doesn’t provide relief from the pain caused by appendicitis. Moreover, if you try to exercise or even walk around, it can aggravate the pain and make it worse. Therefore, it will be better if you avoid moving at all.

Appendicitis is a condition that can be fatal if not treated on time. The inflammation that occurs in the appendix can progress to rupture, peritonitis, sepsis, and ultimately death. So, yes, it is a dangerous condition that should be treated immediately.

Apple cider vinegar is an ingredient that has anti-inflammatory properties and other health benefits as well. It can help to reduce the inflammation in the appendix and pain as well. So, it is considered good for appendicitis.

Are there any homeopathic medicines for appendicitis?

Yes. There are numerous homeopathic medicines available for appendicitis.

You should also know that there is no guarantee that these medicines are effective.

What are the common ayurvedic treatments for acute appendicitis?

There are several ayurvedic treatments available for appendicitis treatment, such as:

There is no assurance that these treatment methods will work for you. You can try them after consulting with the doctor.

How long does it take to recover after appendicitis surgery?

The complete recovery time after appendectomy is around 3-4 weeks. There are several factors too that will impact the recovery time. It includes your overall health, complications from appendicitis, and the specific type of treatment you receive. You will be able to recover more quickly if your overall health is good, there are no complications, and laparoscopic technique is being used for appendix surgery.

Are there any home remedies for chronic appendicitis?

Here are some home remedies that you can try for chronic appendicitis:

You should know that there is no evidence that these home remedies will work. Therefore, it will be better if you use them after consulting with a specialist.

Will there be any consequences of appendix removal?

No. Generally, there are no negative health consequences of removing the appendix surgically. Scientists believe that the appendix is a vestigial organ that has no significant function in the body. Therefore, its removal doesn’t affect the overall health of the individual.

What is the laparoscopic appendectomy success rate?

The success rate of laparoscopic appendectomy is more than 95%. This is so because it is a minimally invasive technique that is performed by specially trained surgeons. They ensure that the procedure is carried out safely and precisely.

What are the benefits of undergoing minimally invasive laparoscopic surgery for appendicitis?

Benefits of laparoscopic surgical removal of appendix include:

What happens when appendicitis is not treated on time?

Common symptoms of peritonitis include:

To prevent these potential complications, it is crucial to consult an appendicitis specialist at the earliest.

What is the difference between acute and chronic appendicitis?

Most people confuse chronic and acute appendicitis with each other. Appendicitis occurs when the appendix becomes infected or inflamed and starts causing abdominal pain. But in acute and chronic cases, the frequency and severity of the pain are quite different.

Appendicitis is said to be acute when a person develops severe symptoms suddenly, within 24-48 hours. It is a medical emergency that should be treated without further ado. It occurs due to the following reasons-

Without treatment, the appendix can rupture or burst out within 2-3 days if the symptoms persist. Moreover, the abdominal pain will be intense and hard to ignore.

Chronic appendicitis can occur due to many different reasons, such as:

In chronic cases, the pain (this is the primary symptom) of appendicitis lasts for longer periods, most often a week or so. There can be other symptoms like fever, swelling, tenderness in the abdomen, tiredness, nausea, diarrhea, etc. present alongside. However, not all people with chronic appendicitis will have these symptoms.

The symptoms also subside on their own and return abruptly, which further makes it harder for the doctor to diagnose the condition accurately. Out of all the cases of appendicitis, only 1.5% are chronic.

What complications can arise if appendicitis is left untreated?

Appendicitis can become life-threatening if it is not treated on time. There is a very high possibility that acute appendicitis causes the appendix to rupture due to which the fecal matter and bacteria spill into the abdominal cavity. This can lead to the following complications:

If these complications arise, it can make it difficult for the doctor to treat appendicitis right away.

How to prevent appendicitis?

Generally, there is no assured way to prevent appendicitis from occurring, except for diet control. By choosing the right food and a balanced diet, you will be able to keep your digestive tract healthy and prevent the appendix from becoming inflamed.

Foods You Should Eat:

All foods that are rich in fiber help to prevent appendicitis. These foods include:

Foods You Should Avoid:

Here are the food items that can increase your risk of appendicitis:

Appendicitis Surgery in Other Near By Cities

Other Treatments in Faridabad

Partner With Us
Media Coverage
About Us
Careers