Inguinal hernia can negatively impact your life and lead incarceration or strangulation if left untreated. Our hernia specialists in Mathura specialize in treating inguinal hernia through open and laparoscopic techniques. 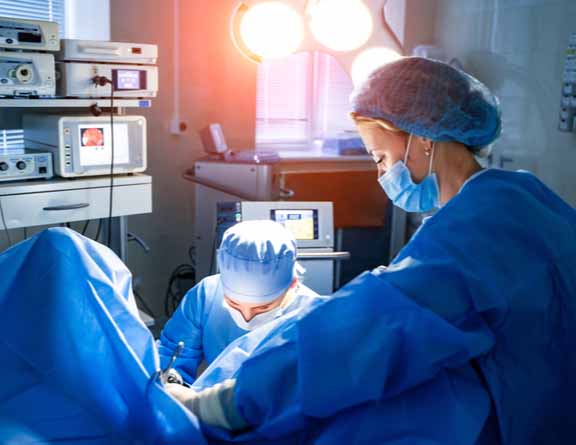 In the physical exam, the doctor checks for bulges in the growing area and you’ll likely be asked to stand and strain or cough. An imaging test like MRI or CT scan or abdominal ultrasound might be ordered by the doctor in case a diagnosis isn’t readily apparent.

Mesh repair surgery is considered the best surgery as per the medical standards. It is considered one of the modern treatments for inguinal hernia. This is done under general anesthesia and involves minimal risk compared to open surgery. The surgeon makes 2-3 incisions at the defect area and inflates it with harmless gas for a clear view inside of the internal organs.

The laparoscope is inserted through one of the incisions and other surgical tools through the other incisions. The laparoscope has a camera attached on top of it, which helps the surgeon to perform the surgery while looking at the monitor in the operating room. This way, the defect is repaired and 3D mesh is placed on strengthening the wall.

How will a surgeon fix the inguinal hernia?

The surgeons at Pristyn Care apply mesh on top to reinforce the hernia repair using the most advanced and highly-precise medical devices to perform laparoscopic surgery.

Which is the most recommended technique for hernia repair?

The laparoscopic technique is appropriate for most patients, including children. Since it is performed using local anesthesia, it is painless and small incision ensures a speedy recovery.

What is the difference between femoral and inguinal hernia?

Inguinal hernia and femoral hernia can arise in both males and females. And in some cases, it is quite difficult to distinguish between them as they occur around the same region.

The key difference between femoral and inguinal hernia is the part from where the intestine bulges out. In the case of an inguinal hernia, the intestine enters the abdominal cavity through an opening in the inguinal canal. It is the passage that allows the spermatic cord and the testicle to descend. Normally, the inguinal canal closes after birth but in some cases, weak spots in the muscle wall are created that causes problems later in life. Inguinal hernias mostly occur in men due to this reason.

Femoral hernias are also found in the groin region but they arise due to different reasons. The femoral artery and vein pass through the femoral canal, which is an opening between the abdominal floor and the upper leg (thighs). If there is a weak spot in the femoral canal, the intestine may bulge out and cause problems. Femoral hernias are more common in women as they have a different bone structure around the pelvis region.

Both types of hernias have similar symptoms and have the potential to cause serious complications. Therefore, if you notice a bulge anywhere in your body, it is crucial that you get it checked and seek proper treatment.

A hernia is a condition that doesn’t go away on its own, and neither can be repaired without intervention.

In the best-case scenario, hernia treatment can be delayed if the bulge is not large and there are no other symptoms present. At this stage, the doctor will recommend that the patient manages the occasional pain with the help of a hernia belt or truss that will prevent the organ from entering the abdominal cavity.

This way, the patient can reduce the symptoms and also stop/delay the progression of the hernia. Ultimately, to ensure that inguinal hernia doesn’t lead to life-threatening complications, surgical repair will be required.

Inguinal Hernia Surgery in Other Near By Cities

Other Treatments in Mathura

Pristyn Pharmacy
Partner With Us
Media Coverage
About Us
Careers