If you have ulcers on your foot that are not healing, it can be an indication of a diabetic foot ulcer. Get in touch with a vascular expert at Pristyn Care today to undergo advanced and effective diabetic foot ulcer treatments such as debridement, reconstruction surgery, etc.

What is Diabetic Foot Ulcer Surgery?

Diabetic foot ulcer surgery is a procedure in which a vascular surgeon removes the infected tissues. At times, when the ulcers are severe, the surgeon recommends diabetic foot ulcer treatments such as debridement and reconstruction surgery for effective results.

Our Vascular Clinics and Hopsitals in India

At Pristyn Care, we make sure that every person who needs advanced diabetic foot ulcer treatment in India gets optimal care. We leverage modern technology and treat patients with compassion to understand and resolve their problems.

What happens if diabetic foot ulcers are left untreated? 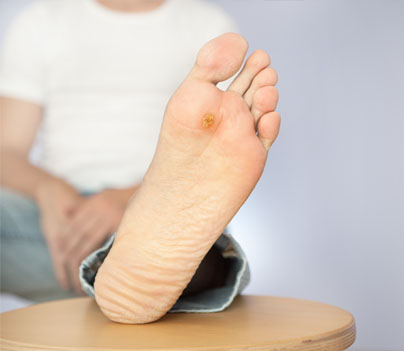 What happens if diabetic foot ulcers are left untreated?

In case you don’t seek treatment for a diabetic foot ulcer in time, you will have to face the following complications:

What are the different types of treatments for diabetic foot ulcers?

What are the different types of treatments for diabetic foot ulcers?

When the foot ulcer cannot be treated using non-surgical methods, the following are different methods the vascular surgeon will consider for the treatment-

1. Debridement- It is a procedure that involves the removal of the hyperkeratotic tissue, fibrin, biofilm, and necrotic tissue from the ulcer wound to facilitate healing. With this technique, the wound healing process can be initiated by the small vessels that transport fresh blood to the edges of the debrided wound.

2. Reconstructive Foot & Ankle Surgery- This method needs expertise and is performed by a Vascular surgeon precisely to reconstruct the affected area. It involves a thorough musculoskeletal examination, plain radiographs, CT scans, and MRI scans that help to determine the surgical plan. Following are different types of reconstruction techniques used by a vascular doctor for diabetic foot ulcer treatment-

The goal of the surgery is foot rebalancing and creating a plantigrade foot that can distribute the pressure in the leg. It is considered a type of internal surgical offloading.

The doctor will inspect the foot, toes, and toenails for cuts, blisters, scratches, or ingrown toenails that can lead to the formation of foot ulcers. S/he may also ask you to stand and walk to analyze how the body weight is distributed across the bones and joints. The shape of the foot will also be checked as abnormal alignment of the foot can also increase the risk of ulcers. A vascular doctor may also recommend a few diagnostic tests to determine the best-suited treatment according to the severity of the condition. Some of the tests are- 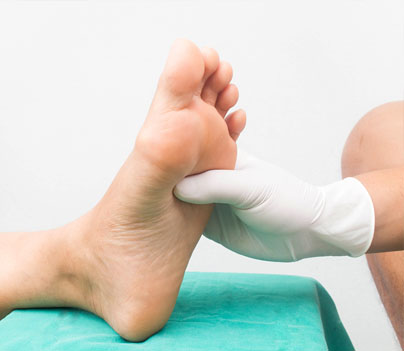 How to prepare for diabetic foot ulcer treatment? 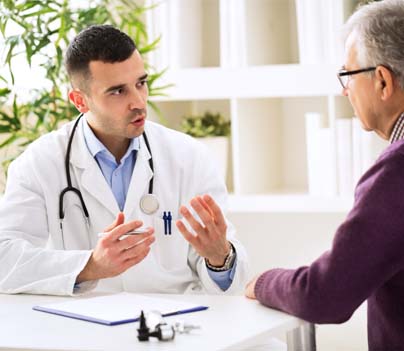 How to prepare for diabetic foot ulcer treatment?

To prepare you for diabetic foot ulcer surgery, the doctor will give you clear instructions, including:

What to expect after diabetic foot ulcer surgery?

What to expect after diabetic foot ulcer surgery?

After the surgery completes, you will most probably be asleep. You will be placed in the observation room until the anesthesia wears off. Afterward, you will be shifted to your ward. Depending on the procedure used for the treatment of diabetic foot ulcers, you may need to stay in the hospital for 24-72 hours. The doctor will closely monitor your condition after the surgery to make sure that there are no risks of complications.

Immediately after the surgery, you will feel numbness in the lower half of the body. Later, you may feel pain or discomfort for which the doctor will prescribe painkillers. The doctor will apply a splint to cover your foot and lower leg for proper support.

You will have to take complete bed rest for at least two days. After the doctor ensures that the wound is healing properly, you will be discharged. The doctor will also provide a detailed recovery plan to help you get back to your feet as soon as possible.

How long does it take to recover from diabetic foot ulcer treatment?

The recovery period after diabetic foot ulcer management depends on a variety of factors such as the severity of the wound, location, blood circulation, wound care, diabetes management, etc. The patient may take a few weeks to a few months to completely recover, depending on these conditions.

What are the risks associated with diabetic foot ulcer surgery?

Can a diabetic foot ulcer be treated at home?

No. A diabetic foot ulcer cannot and should not be treated at home. In most cases, the ulcer becomes infected which further delays the healing process increasing the chances of infection. Removing the infection is not possible with home remedies. You should always consult a doctor for proper treatment of foot ulcers.

Is it always important to take antibiotics for foot ulcer treatment?

No. Treatment of diabetic foot ulcers using antibiotics won’t be required if the ulcer is not infected. In case mild soft tissue infection is present, it can be treated using oral antibiotics such as clindamycin, dicloxacillin, cephalexin, etc.

Can I apply a cream to a diabetic foot ulcer?

Yes. You can use certain creams or moisturizers to promote the healing of the diabetic ulcer. Doctors often advise patients on ointments that contain urea as it creates a barrier film over the wound and aids in healing.

What is the Diabetic Foot Ulcer Treatment Cost in India?

What are the non-surgical treatments for diabetic foot ulcers?

What are the non-surgical treatments for diabetic foot ulcers?

The following are the non-surgical treatments for diabetic foot ulcers-

Mr. Vikram Sharma (changed name) approached Pristyn Care in January 2022. He complained of swelling in the legs, pus, discoloration of the skin, blood discharge, and an ulcer over the right heel. He was 62 years old and was diagnosed with a Grade 3 diabetic foot ulcer and was a patient of hypertension and heart disease. He also underwent CABG(Coronary Artery Bypass Grafting) in 2008, which was major surgery.

Our medical coordinator connected him with our vascular expert Dr. Sanjit Gogoi. He asked about his medical and family history of Mr. Sharma to assess the condition. He even conducted a physical examination to check the tenderness and the amount o fare that is affected due to a diabetic foot ulcer. Dr. Gogoi noted ankle swelling, edema, lipodermatosclerosis, hyperpigmentation of the limbs, and foul-smelling discharge.

After a thorough examination, Dr. Gogoi concluded that Mr. Sharma is suffering from both diabetic foot ulcer and peripheral artery disease(PAD). The doctor then recommended debridement treatment to Mr. Sharma. During the treatment, an assistant cleaned the affected area with a solution, and later Dr. Gogoi removed the infected tissues precisely without harming blood vessels. Mr. Sharma stayed in the hospital for 3 days. He got discharged when the doctor ensured that the surgery was successful and Mr. Sharma was not showing any odd symptoms post-surgery.

Mr. Sharma took 3 follow-up consultations, recovered successfully, and informed that he can now move his foot without any pain or discomfort.