What is IUI Treatment?

Intrauterine insemination, commonly known as IUI, is a fertility treatment. In this process, sperm are directly placed into the uterus of the woman. When a couple naturally tries to conceive, the sperm has to travel from the vagina through the cervix to the uterus. It then goes into the fallopian tubes. However, when couples have problems with their health, they often fail to conceive through the natural process. In IUI, the sperm is washed and concentrated and placed directly into the uterus, bringing a better chance for the sperm to come closer to the egg. IUI is believed to increase the chances of pregnancy in couples who fail to conceive naturally.

Who should consider IUI?

Increased chances of a full-term pregnancy

Financially easier than other fertility methods

Simpler and time-consuming than IVF

30% off on diagnostic tests 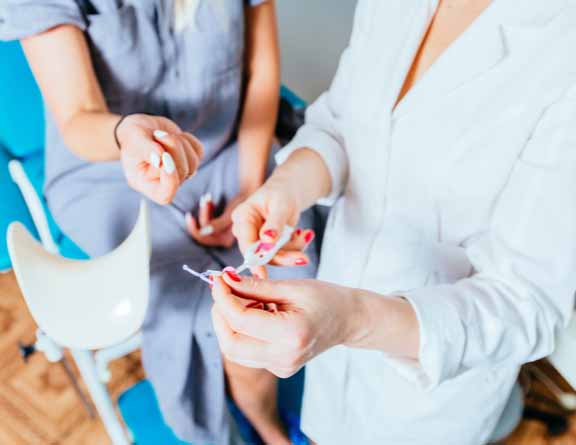 At Pristyn Care, obstetricians and gynecologists are highly experienced and provide comprehensive treatment for assisted reproductive technology. To rule out the cause of infertility and to make the IUI cycle more successful the gynecologist may recommend a few diagnostic tests:

IUI treatment is done at a fertility clinic. If you are relying on a sperm donor for the process, the donor sperm will be thawed and prepared. If the partner's sperm is to be injected, his semen will first be evaluated to ensure the sperms are motile and agile. The male partner can also put semen in a sterile home collection kit but should ensure that the semen reaches the clinic within one hour of collection. Make sure that the collected semen sample is stored at room temperature until it reaches the clinic.

How many days before IUI should you abstain from sex?

It usually should not be more than 72 hours since his last ejaculation to ensure the best motility. If the low sperm count is the reason for IUI, it is generally best to wait 48 hours between ejaculation and sperm collection.

Are there any restrictions after IUI?

There are no physical restrictions after IUI treatment. The patient can carry out daily activities without any problem. You might notice some spotting after the process, but that is normal. However, it is advised not to do any strenuous activities or heavy weightlifting during or post IUI treatment cycle.

Does IUI require a woman to be on fertility drugs?

IUI or intrauterine insemination is a relatively simple fertility treatment. It may be done with or without fertility drugs.

Which is a more successful method IUI or IVF?

IVF is considerably more effective than IUI because the number of cycles and steps are more processed. Therefore, couples may need to go through several IUI cycles before being able to conceive.

Which tests need to be performed before IUI treatment?

Before the procedure, women should undergo an X-Ray test that confirms the presence of a fallopian tube. If the male partner’s semen is injected, they need to give a semen sample to make sure that the sperms are healthy and there is no presence of any infectious germs.

What is the IUI treatment cost in India?

The average cost of one cycle of IUI treatment for a couple in India range from Rs.10,000 to Rs. 12,000. However, this is a cost that should be considered for reference only. The actual cost varies depending on factors such as the location of the fertility clinic, fees of the specialist, charges of hospital, etc.

How can I pay for one cycle of IUI treatment at Pristyn Care clinic?

You can pay for the entire treatment with both cash and cashless payments such as Cards (Credit/Debit), Cheques, or zero-cost EMIs.

I have a medical insurance plan. Can I pay for IUI with the same?

No. Unfortunately, most of the medical insurance plans in India still do not offer any coverage for IUI. However, there are financing institutions that can help in arranging for other ways to finance the procedure.

Is IUI treatment performed at your clinic with proper safety measures in place?

Yes. We ensure that all necessary precautions to curb COVID-19 infection are followed during the entire treatment of IUI. Every patient’s safety is of grave importance to us. Hence, we are taking the following measures-

An OB- gynecologist certified in infertility treatment can perform IUI procedure. This is why these doctors are also known as infertility specialists.

What are the qualifications of an infertility specialist for IUI treatment?

The certifications of a must include one/ more of the following qualifications:

What is a good experience range for an infertility specialist?

A good experience range for an IUI surgeon is a minimum of 10-15 years in obstetrics-gynecology or infertility treatments.

What is the average consultation fee for an infertility specialist in India?

A typical consultation fee for an infertility specialist (OB-GYN/ reproductive-endocrinologist) may range anywhere between INR 500 to INR 1500 in India.

When to consult an IUI Specialist?

You should consult an IUI specialist if you have been wanting to conceive for more than a year but have failed despite regular and unprotected sex.

While you can continue to try natural methods for as long as you want, getting medical help without delay would help you understand the root cause of infertility and provide an effective and immediate solution. Also, since age is an important factor in reproduction, it is important that you take an early decision. Some prominent markers that you should consider artificial reproductive methods is when:

Is age an important factor in IUI?

Yes, age is an important factor in reproduction, both by natural and artificially assisted methods including IUI.

What is the right age for infertility treatments?

Though with advancing technology, the age cap on healthy pregnancy has been extended to over fifty, age is still a primary factor in female reproductive health. Doctors suggest mid-thirties as a good age for women to start considering infertility treatments such as IUI if they have been trying but failing to conceive naturally despite a year or more of trial.

How long does an IUI cycle take?

An IUI cycle typically begins during the start of your periods and ends with a pregnancy test. This process thus takes approximately 2-3 weeks.

How long does an IUI process take?

The process of placing washed sperms in the woman’s uterus takes less than 10 minutes. However, doctors usually advise to lie still for another few minutes and take a little rest. The entire process thus may take you anywhere between 30- 40 minutes.

Do IUI clinics also do surrogacy?

Yes, IUI clinics also do surrogacy implants. However, they only do the process of implantation and do not arrange the surrogate. At best, they can help you connect with an infertility bank. (This is precisely because the Indian law mandates that both- the infertility clinic and infertility lab be kept separated.)

Does IUI lead to twins?

At times, yes. However, when under the guidance of a trained infertility specialist, the chances of multiple childbirths can be reduced to a significant extent.

Is IUI a good option for secondary infertility?

Yes, couples struggling with secondary infertility can opt for IUI treatments. However, which method is best for you depends directly on your age, diagnostic results, and the root of your infertility.

Is IUI a good option for women with PCOS?

Yes, when combined with a few lifestyle changes and hormonal treatments IUI can be an excellent option for women struggling with infertility because of PCOS.

What should I look for in an IUI lab or infertility clinic?

Any infertility clinic or IUI lab is as good as its doctors and its technologies. Thus some of the factors you can look at are its board certifications, years of experience, and history of success rates.

Yes, with advancing technologies and increasing awareness, babies born through IUI treatments are just as healthy as any other child born through natural conception methods. However, like any other assisted technology, the treatment requires you to carefully follow all the suggested instructions and remain patient and positive throughout the treatment.

What are the common risks of IUI treatment?

With the advancement in medical sciences and betterment in clinical diagnostics and tools, the severity of risks or complications of IUI has reduced drastically over the decade. However, some subsidiary risks include:

What are the common side effects of IUI treatments?

As you progress through your IUI cycle, you may experience the following side effects. However, please note, they are absolutely normal and shall subside as you slowly move through your pregnancy.

Top Cities Where We Do / Treat iui treatment

Intrauterine insemination, commonly known as IUI is a fertility treatment. In this process, sperm are directly placed into the uterus of the woman. When a couple naturally tries to conceive, the sperm have to travel from the vagina through the cervix to the uterus. It then goes into the fallopian tubes. When couples have problems with their health, they often fail to conceive...

through the natural process. In IUI, the sperm are washed and concentrated, and placed directly into the uterus, bringing a better chance for the sperm to come closer to the egg. IUI is believed to increase the chances of pregnancy in couples who fail to conceive naturally.

When is the IUI the best choice?

Patients with the following conditions can achieve best results from IUI treatment:

IUI fertility treatment is done at a fertility clinic. If you are relying on a sperm donor for the process, the donor sperm will be thawed and prepared. if you are using your partner's sperm, his semen will first be evaluated. The male partner can also use semen from a sterile home collection kit, but should get the semen to the clinic within one hour of collection. It is to be noted that the collected semen is stored in room temperature until it reaches the clinic.

In the clinic, the semen would go through a 'washing' procedure in order to remove all impurities from it, leaving only what is needed to get the female pregnant.

The female would have to lie down on her back, just the way for any cervical/ vaginal exam. The doctor uses a speculum to gently kopen the vagina. The 'washed' semen will then be placed inside the uterus through the catheter. Since the sperm is directly placed inside the uterus, there is no chance of the sperm falling out. However, you’ll remain reclined on the exam table for 10 to 30 minutes following the insemination.

Are there any Risks and Complications of IUI treatment?

There are no major risks in IUI treatment.