Blog > ENT > Nose Before and After Rhinoplasty 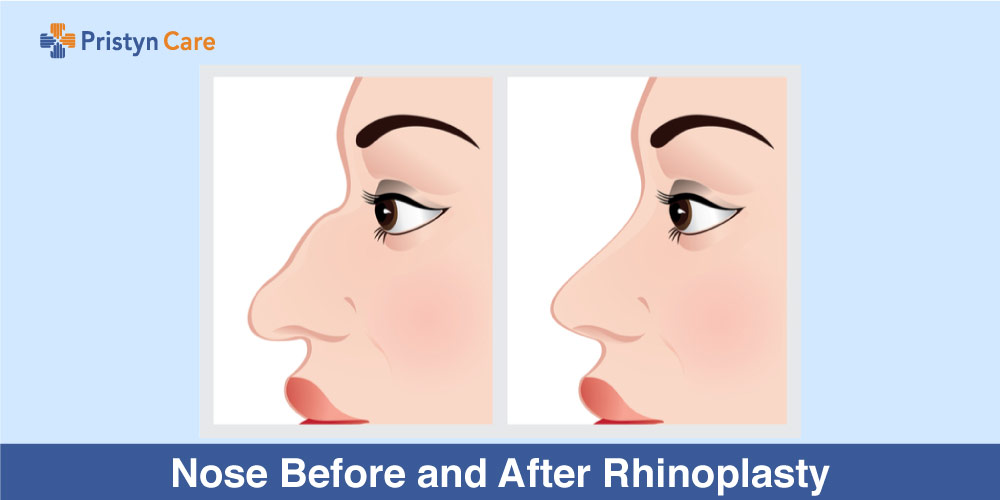 Are you unhappy with the shape of your nose? Do you consider your nose to be the most eccentric feature of your face? Or are you just seeking for a slight change in its appearance to enhance your beauty?

Well! The appearance of your nose can be altered through rhinoplasty. Rhinoplasty also is known as ‘nose job’ is a very popular procedure undertaken by numerous people all over the world.

Rhinoplasty aims to provide a new look to the patients who are unhappy with their appearance or functionality of their nose. It has evolved over the years and has much more versatile applications.

Before undergoing rhinoplasty, one should consider knowing every detail about it.  The details regarding the appearance and functionality of your nose before and after Rhinoplasty.

Preparing For A Rhinoplasty

Note-Rhinoplasty cannot be done in case a person is suffering from a bleeding disorder such as hemophilia.

After understanding about the surgery, you can undergo rhinoplasty under the influence of general anesthesia. Make sure you have someone to take care of you, during and after the surgery so that you can easily recover.

Rhinoplasty surgery is a day-care procedure performed under the influence of anesthesia.

Once the patient is numb or unconscious, the surgeon makes cuts between or inside the nostrils. After this, they separate the skin from the cartilage or bone and then reshaping starts. Either an extra bone or cartilage is removed or extra bone extracted deep from the ear is placed to shape the new nose.

Once the nose is given a shape, the doctor places nasal packs or splints inside the nostrils to stabilize the septum to help the nose retain its new shape. The whole procedure is usually completed within one to two hours. However, complex surgeries can take a longer time.

Recovery After the Surgery

After the surgery, the doctor monitors the patient for a few hours to check for complications. Once the doctor checks that everything is fine, then the patient is discharged the next day.

During the discharge, the doctor advises some precautions to take which are explained henceforth.

After rhinoplasty, the patient is advised to take rest as much as possible. The patient should sleep with his head raised above the chest while lying. This can help reduce the pressure on the nose and prevent bleeding and swelling.

During the followup consultation, the doctor removes the splints. It is normal to have memory lapses, impaired judgment and slow reflexes during the recovery.

The results of rhinoplasty surgery are found to be long-lasting. Swelling due to surgery may subside within a few weeks, and you may notice your fully refined new nasal contour in a year.

If you are not satisfied with how your nose looks and thinking of undergoing a septoplasty, then you contact Pristyn Care medical coordinators or book an appointment today!

Also Read: Nose Before And After Septoplasty

What To Expect After Septoplasty and Turbinate Reduction
×
×