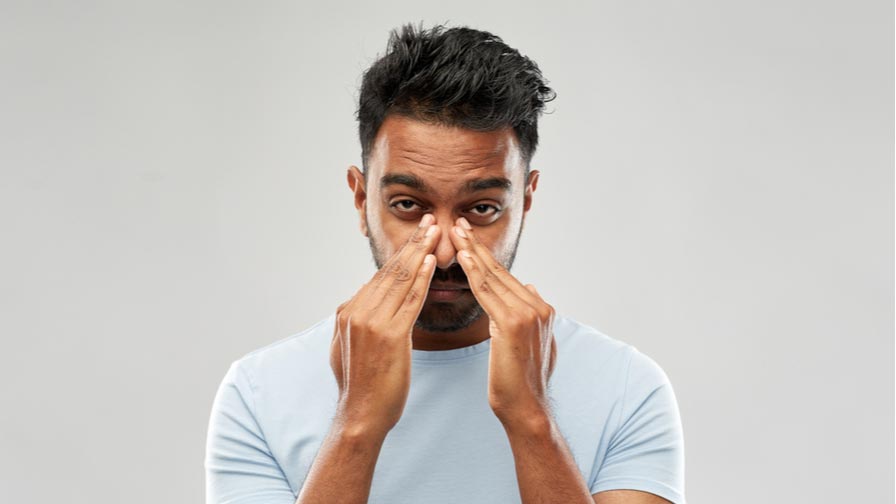 What is Deviated Nasal Septum?

A deviated septum is defined as a bent or crooked nasal septum. The condition is very common and goes unnoticed for over 80% of the cases.

Since the problem is common and goes without notice, it is evident that it does not cause a lot of problems. If the nasal septum is severely shifted or bent towards one side of the nose, it can lead to problems such as blockage of nasal flow. The same results in loss of sufficient airflow to the nose causing difficulty breathing.

A deviated septum, if severely bent, can cause nasal blockage or congestion or obstruction of the airway. The same can further lead to swelling of the tissues lining the nose. The condition if causing trouble breathing, recurrent sinus infection or blocked nostril that doesn't respond to at-home treatments or nosebleeds, you may need to consult an ENT specialist.

In case the deviated septum is causing a lot of problems, getting a proper treatment after a thorough diagnosis will be in your favor.

What Causes a Deviated Septum

But, more commonly, it occurs during fetal development and is apparent at birth. In case it results from the injury to the nose, which causes the nasal septum to be moved out of position, it can be painful and may affect breathing. Moreover, in kids, such an injury may occur during childbirth or the adolescent age.

In both kids and adults, a lot of accidents can be a factor that lead to a nose injury, thus, resulting in the deviated nasal septum.

It is also referred to as trauma to the nose that can occur during contact sports which can lead to the crooked or bent septum. Also, rough play such as wrestling or automobile accidents can be other factors. Besides, the normal process of aging may also affect nasal structures causing a deviated septum over time.

Swelling and irritation of the nasal cavities in the long-term can further narrow the nasal passage and form a deviated septum, resulting in nasal obstruction.

What are the Top Symptoms

The most common signs and symptoms of a deviated nasal septum are:

Besides, it can also cause problems with sleep. The same contributes to loud snoring or sleep apnea.

The prevention of nasal septum deviation which is present at birth is rather difficult as it forms when the baby is growing in the womb. But, a person can prevent injuries to the nose that can cause a deviated septum.

A person has to be alert and try to avoid any injury to the face or nose. If you drive, you can wear a helmet. If you are into contact sports, you can wear a midface mask.

To understand the types of deviation in the nasal septum, you have to understand a bit about the human respiratory system. It is one of the complicated systems and particular parts of the respiratory system to cooperate with one another. The complicated functions of the system are not fully recognized but experts classify the septum deviation in 7 types. The same are listed below:

Type I: A unilateral crest which does not disturb the function of the nasal valve

Type II: Disturbance of the valve function caused by the unilateral crest

Type III: One unilateral crest at the level of the head of the middle nasal concha

Type IV: Two crests, one at the level of the head of the middle nasal concha, and the other on the opposite side in the valve area and it disturbs the valve functions

Type V: A unilateral ridge on the base of the septum, while on the other side the septum is straight

Type VI: A unilateral sulcus running through the caudal-ventral part of the septum, while on the other side there is a ridge and leading to the asymmetry of the nasal cavity

Type VII: It is a mix of types from I to VI

An expert ENT doctor can help you figure out if you have deviated septum in a physical examination. The ENT specialist can also ask questions to discuss if you are facing symptoms or not. The doctor can see if the symptoms are getting worse or improving. The expert ENT specialist diagnoses a deviated septum with a bright light and an instrument that can help visualize the nasal septum by opening the nostril.

The best treatment of a deviated nasal septum is an advanced surgical procedure with modern medical devices. The best possible surgical procedure for treating a deviated septum and sleep apnea takes anywhere between 60-90 minutes to complete. However, it depends on the complexity of the condition as well. The modern treatment entails the reconstruction of the nasal septum, septoplasty, and removal of any hindrance such as extra pieces of cartilage or bone. In the modern daycare procedure to straighten the septum, the patient may not experience any pain. After the treatment, a patient will feel improved breathing, improved quality of life, a heightened sense of smell and a better facial structure.

After a deviated nasal septum surgery, a patient has to follow a soft diet for the next 2 weeks. The diet after septoplasty includes consumption of milkshakes, ice cream, yogurt, cottage cheese, mashed potatoes, rice, pasta, creamed soups, custard, and puddings. Also, a patient has to avoid food that require a lot of chewing.

Though modern surgery involves fewer complications, the surgical procedure may involve some problems. Dehydration and too much activity after the surgery can also increase the chances of bleeding.

Why does Snot or Mucus colour vary?

Things Parents Should Not Ignore Before Their Child’s Board Exams

Does septoplasty change the shape of the nose?

ENT doctors perform this surgery to straighten the septum. It is called septoplasty. It's usually done by an ENT specialist. Some people also get plastic surgery on their nose, to change its shape, at the same time.

What helps in relief from pain after septoplasty?

A patient can apply an ice pack, covered with a clean cloth or towel, to the nose and eye area to reduce pain and swelling. At night, sleep with the head propped up on two pillows to diminish swelling and congestion.

There is usually very minimal pain after surgery. If you experience discomfort, your surgeon may suggest over-the-counter pain medication.

We Treat Deviated Nasal Septum in These Cities

Why does Snot or Mucus colour vary?

Things Parents Should Not Ignore Before Their Child’s Board Exams